What effects does chocolate have on a person? 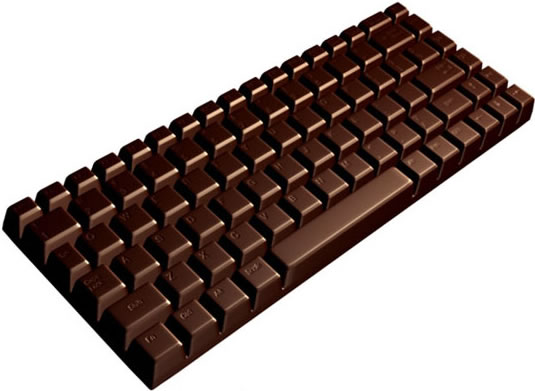 Pleasure of consuming
Part of the pleasure of eating chocolate is due to the fact that its melting point is slightly below human body temperature: it melts in the mouth. Chocolate intake has been linked with release of serotonin in the brain, which produces feelings of pleasure. A study reported by the BBC indicated that melting chocolate in one’s mouth produced an increase in brain activity and heart rate that was more intense than that associated with passionate kissing, and also lasted four times as long after the activity had ended. Research has shown that heroin addicts tend to have an increased liking for chocolate; this may be because it triggers dopamine release in the brain’s reinforcement systems — an effect, albeit a legal one, similar to that of opiates.

Potential health benefits and risks
Recent studies have suggested that cocoa or dark chocolate may possess certain beneficial effects on human health. Dark chocolate, with its high cocoa content, is a rich source of the flavonoids epicatechin and gallic acid, which are thought to possess cardioprotective properties. Cocoa possesses a significant antioxidant action, protecting against LDL oxidation, perhaps more than other polyphenol antioxidant-rich foods and beverages. Processing cocoa with alkali destroys most of the flavonoids. Some studies have also observed a modest reduction in blood pressure and flow-mediated dilation after consuming approximately 100g of dark chocolate daily. There has even been a fad diet, named “Chocolate diet”, that emphasizes eating chocolate and cocoa powder in capsules. However, consuming milk chocolate or white chocolate, or drinking fat-containing milk with dark chocolate, appears largely to negate the health benefit. Processed cocoa powder (so called Dutch chocolate), processed with alkali greatly reduces the antioxidant capacity as compared to “raw” cocoa powder. Chocolate is also a calorie-rich food with a high fat content, so daily intake of chocolate also requires reducing caloric intake of other foods.

Several population studies have observed an increase in the risk of certain cancers among people who frequently consume sweet ‘junk’ foods such as chocolate. However, very little evidence exists to suggest whether consuming flavonoid-rich dark chocolate may increase or decrease the risk of cancer. Evidence from laboratory studies suggest that cocoa flavonoids may possess anticarcinogenic mechanisms, but more research is needed to prove this idea.

As a stimulant
Chocolate contains a variety of substances, some of which have an effect on body chemistry. These include:

* Sugar: Chocolate bars (as opposed to cocoa) contain large amounts of sugar.
* Theobromine: This is the primary alkaloid found in cocoa and chocolate, and is one of the causes for chocolate’s mood-elevating effects. This mild stimulant belongs to the methylxanthine family, which also includes the similar compound caffeine, with which theobromine is frequently confused.
* Anandamide: An endogenous cannabinoid.
* Tryptophan: An essential amino acid that is a precursor to serotonin, an important neurotransmitter involved in regulating moods.
* Phenethylamine: An endogenous alkaloid and monoamine. Often described as a ‘love chemical’, it can cause endorphin releases in the brain. However, unlike its synthetic derivative amphetamine, it is quickly metabolized by the enzyme MAO-B, preventing significant concentrations from reaching the brain.
* Caffeine: This stimulant is present mainly in coffee and tea. Exists in chocolate in very small amounts.

Current research indicates that chocolate has a weak stimulant effect due mainly to its content of theobromine. However, chocolate contains too little of this compound for a reasonable serving to create effects in humans that are on par with a coffee buzz. Chocolate contains only small amounts of the compound caffeine. There are 5 to 10 milligrams of caffeine in one ounce of bittersweet chocolate, 5 milligrams in milk chocolate, and 10 milligrams in a 170 millilitre cup of cocoa. There are 100 to 150 milligrams of caffeine in an 220 millilitre cup of coffee; it would be necessary to eat more than a dozen chocolate bars to get the same amount of caffeine as one cup of coffee. The pharmacologist Ryan J. Huxtable has described chocolate as “more than a food but less than a drug”. However, chocolate is a very potent stimulant for horses; its use is therefore banned in horse-racing. Theobromine is also a contributing factor in acid reflux because it relaxes the esophageal sphincter muscle, allowing stomach acid to enter the esophagus more easily.

Chocolate also contains small quantities of the endogenous cannabinoid anandamide and the cannabinoid breakdown inhibitors N-oleoylethanolamine and N-linolenoylethanolamine. Anandamides are produced naturally by the body, in such a way that their effects are extremely targeted (compared to the broad systemic effects of drugs like tetrahydrocannabinol) and relatively short-lived. In experiments, N-oleoylethanolamine and N-linolenoylethanolamine interfere with the body’s natural mechanisms for breaking down endogenous cannabinoids, causing them to last longer. However, noticeable effects of chocolate related to this mechanism in humans have not been demonstrated.

Some studies have described a condition called Hysteroid dysphoria, characterized by repeated episodes of depressed mood in response to feeling rejected, and a craving for chocolate.

Medical applications
Mars, Incorporated, a Virginia-based candy company, spends millions of dollars each year on flavonol research. The company is talking with pharmaceutical companies to license drugs based on synthesized cocoa flavonol molecules. According to Mars-funded researchers at Harvard, the University of California, and European universities, cocoa-based prescription drugs could potentially help treat diabetes, dementia and other diseases.

Coughing
Research indicates that chocolate may be effective at preventing persistent coughing. The ingredient theobromine was found to be almost one third more effective than codeine, the leading cough medicine. The chocolate also appears to soothe and moisten the throat.

Diarrhea
South American and European cultures have used cocoa to treat diarrhea for hundreds of years. A study done at Children’s Hospital & Research Center Oakland, in collaboration with scientists at Heinrich Heine University in Germany, has shown that flavonoids can inhibit the development of fluids that result in diarrhea.

As an aphrodisiac
Romantic lore commonly identifies chocolate as an aphrodisiac. The reputed aphrodisiac qualities of chocolate are most often associated with the simple sensual pleasure of its consumption. More recently, suggestion has been made that serotonin and other chemicals found in chocolate, most notably phenethylamine, can act as mild sexual stimulants. While there is no firm proof that chocolate is indeed an aphrodisiac, giving a gift of chocolate to one’s sweetheart is a familiar courtship ritual.

Acne
There is a popular belief that the consumption of chocolate can cause acne. Pure chocolate contains anti-oxidants which aid better skin complexion. The University of Pennsylvania and the US Naval Academy conducted experiments that fed subjects chocolate or a bar with similar amounts of macronutrients (fat, sugar etc.) and found that consumption of chocolate, frequent or not, had no effect on the developing of acne. Chocolate bars with milk content may contribute to acne. It is not the chocolate itself that causes acne, but rather the milk with which the chocolate is mixed.

Lead
Chocolate has one of the higher concentrations of lead among products that constitute a typical Westerner’s diet. Recent studies have shown that although the beans themselves absorb little lead, it tends to bind to cocoa shells and contamination may occur during the manufacturing process. A recent peer-reviewed publication found significant amounts of lead in chocolate. A review article published in a peer-reviewed journal in 2006 states that despite high consumption levels of chocolate, there is a paucity of data on lead concentrations in chocolate products. Mean lead levels in the samples tested ranged from 0.0010 to 0.0965 µg lead per gram of chocolate, while the international standard limits the lead content of cocoa powder or beans to 1 µg of lead per gram product. In 2006, the U.S. FDA lowered by one-fifth the amount of lead permissible in candy, but compliance is only voluntary. While studies show that the lead consumed in chocolate may not all be absorbed by the human body, there is no known threshold for the effects of lead on children’s brain function and even small quantities of lead can cause permanent neurodevelopmental deficits including impaired IQ. There have been no known cases of lead poisoning reported from those consuming high amounts of chocolate products with lead concentrations below the international limit.

Toxicity in animals
In sufficient amounts, the theobromine found in chocolate is toxic to animals such as horses, dogs, parrots, small rodents, and cats (kittens especially) because they are unable to metabolise the chemical effectively. If they are fed chocolate, the theobromine will remain in their bloodstream for up to 20 hours, and these animals may experience epileptic seizures, heart attacks, internal bleeding, and eventually death. Medical treatment involves inducing vomiting within two hours of ingestion, or contacting a veterinarian.

A typical 20-kilogram dog will normally experience great intestinal distress after eating fewer than 240 grams (8.47 oz) of dark chocolate, but will not necessarily experience bradycardia or tachycardia unless it eats at least a half a kilogram (1.1 lb) of milk chocolate. Dark chocolate has 2 to 5 times more theobromine and thus is more dangerous to dogs. According to the Merck Veterinary Manual, approximately 1.3 grams of baker’s chocolate per kilogram of a dog’s body weight (0.02 oz/lb) is sufficient to cause symptoms of toxicity. For example, a typical 25-gram (0.88 oz) baker’s chocolate bar would be enough to bring about symptoms in a 20-kilogram (44 lb) dog. Of course, baking chocolate is rarely consumed directly due to its unpleasant taste, but other dark chocolates’ canine toxicities may be extrapolated based on this figure. Large dogs such as St. Bernards or Rottweilers are somewhat less susceptible to poisoning, but as dogs like the taste of chocolate products as much as humans do, they should still be kept out of their reach; treats made from carob are a good substitute and pose no threat. There are reports that mulch made from cacao bean shells is dangerous to pets (and other animals).

Gum disease—or periodontal disease—is an infection of the bone and gum tissues caused by an accumulation of plaque and bacteria. Many symptoms of gum disease do not appear until advanced stages of the disease, but indications may include persistent bad breath odor,

We all have our problems—an misbehaving dog, too many TiVo’d shows to watch—but skin problems can’t be ignored (unlike all those waiting episodes of The Office). You stare at skin trouble every time you look in the mirror. Some quick fixes: Problem: Bumpy,

Sci-fi worthy medical advances can give your ticker superpowers By: Holly C. Corbett        These days your refrigerator can tell you when the milk’s gone bad, your car sounds an alarm before you back into the neighbor’s Mazda, and your phone

Indeed, even after the debauched Roman ruler Nero took his own life in A.D. 68, his mismanagement and abundances filled a progression of common wars. No less than four heads took the position of authority in the turbulent year after Nero’s passing;